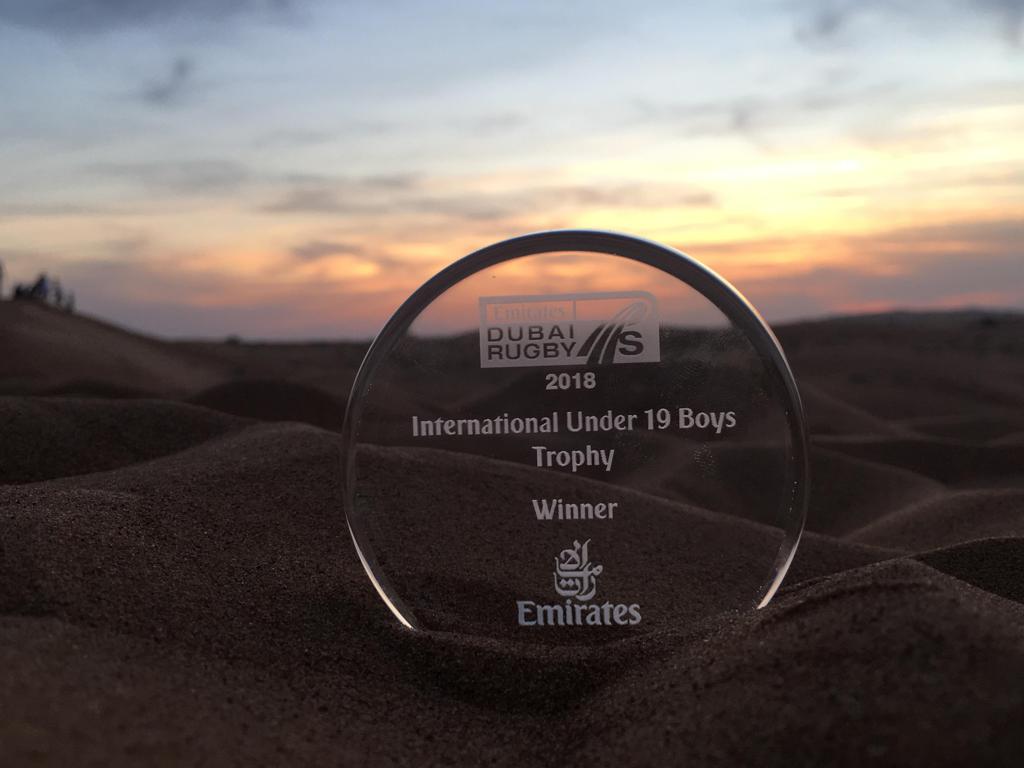 The North American Lions took home the Boys International U19 championship at the Dubai 7s over the weekend.

Day One of the three-day tournament did not turn out as well as could have been hoped for. The initial game between the NA Lions and Tygerberg went well for the Lions. In discussions with the coaching staff of Tygerberg, who would take 2nd in pool play, the Lions coaches learned that the Tygerberg team did not expect the level of physicality and skill that the Lions brought to the game. Dominic Tianga scored two tries, while, in an exceptionally physical game on both sides, a rock-solid defense limited Tygerberg to a single try. The final score was 26-7 in favor of the NA Lions with two tries from Tianga, and tries from Elijah Billups, Shane Rikley-Krindle, and John Grande IV.

The second game of the day saw the NA Lions struggle with defense and their chemistry. With such a large group of exceptional players, it is easy for those players to become a group of individuals and the Lions were not immune to that. They played the KwaZulu–Natal provincial side, and the KZN boys came out for blood. They quickly scored on the first kickoff and put pressure on the Lions. They won all but one restart in the first half, and by the time the whistle blew, the Lions found themselves on the short end of a 24-0 score. After a brief chat with the coaches, the Lions came back, but it was too late; final score 29-14 for KZN. Tianga scored both Lions tries.

That left the Lions 1-1 on the first day and needing a win to get to the Cup Round. The team seemed rejuvenated on Day Two after spending the previous evening getting to know each other and increasing the unity with the group.

The last pool match would be against the South African All-Stars, who were also 1-1 from day one after a loss to Tygerberg in their second match. The Lions needed not only to win, but also score enough to get a good points difference. They did the job, beating the All-Stars 24-10, with Billups scoring twice and Tianga and Braden Bruce adding tries. Meanwhile, Tygerberg beat KZN and that left the Lions at the top of the pool, and headed into the Cup Quarterfinals.

The last game of Day Two would find the Lions in the Cup Quarters against a team called AMDEC Group 7s. They are a South African Corporate sponsored team that was similar to the NA Lions, a invitational Elite squad.  The Lions would score first with a try by Bruce, and then a quick second try off a poach by Noah Wright. Both conversions were missed, putting the score 10-0. AMDEC quickly came back, receiving a penalty try for playing the man while pursuing a chip kick into in-goal, and then AMDEC took the lead with a try to make it 12-10.

Shane Rikley-Krindle then raced in just before halftime to regain the lead for the Lions at 17-12. In the second half, the Lions got tries from Billups and Bruce (his second) to finish up the scoring 29-12.

On Day Three had the Lions going up in the semifinals against the North American Barbarians. This was expected to be a tough, physical match, with three of the Barbos currently in Chula Vista at the Olympic Training Center and three of them having recently competed in the Jr Olympics. The first half was a contest of defenses, and it wasn't until six minutes in that the first points were scored. Elijah Billups went over for that try, but the Lions also lost Bruce to an injury - The took a high tackle and needed eight stitches in his mouth for his trouble.

The second half, the Barbos scored three minutes in, but Jordan Ng scored with a minute left, and Thomas Isherwood, who was excellent with the kicking all weekend, converted for a 12-5 lead. The Lions recovered the restart, kept the ball in play and kicked it out, sealing the victory over the Barbarians and insuring their spot in the stadium for the final.

The victory would set up a showdown of epic proportions. The NA Lions would be meeting the Central South African Invitational team, made up of mostly Stellenbosch players and young professionals. They were a powerful team and had gone undefeated in pool play and were favorites to win. They proved how good they were when, upon kickoff, the proceeded to score under the posts with only 20 seconds gone on the clock.

This had to the potential to be a very long game for the North American Lions, but they did not fold. the Lions instead responded in kind.

The turning point, and what put the game out of reach, was a pick off the ruck by Tianga. He opted to attack the short side, and streaked down the sidelines for 50 meters before curving around and touching down under the posts. The massive crowd (in the stadium for the World Series tournament) rose to its feet. Along with Tianga, Ng, Isherwood, and Rikley-Krindle also scored to finish off Central South Africa 28-14.

"This was an incredible experience for all," said Cressler. "This marks the first time in the 50 years of the Dubai 7s that an American or Canadian squad has won any division at the tournament. The boys handled themselves well on and off the field and insured a place in the history books. It also proves out the system of Academies that are beginning to run in the US and Canada as well as the North American High School 7s Championship series (NAHS7s) where all the kids competed with one of the academy programs.  They have also set a high bar for those who come after them, both players and coaches, as they will be returning next year to defend their title."

Dominic Tianga would be crowned the NA Lions player of the Tournament, as he scored six tries.

For more on the NAHS 7s email info@NAHS7s.com.

Thomas Isherwood was kicking at 86%, missing only three conversion attempts.